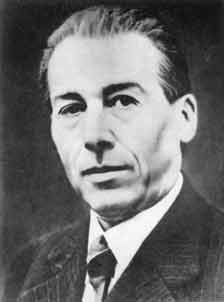 Who was Tau Harmonius?

Tau Harmonius were the ecclesiastical name for Constant Martin Chevillon

(born 26.10.1880 – dead 22.03.1944), Patriarch for both Eglise Gnostique Universelle and the Eglise Gallicanne. With respect of EGU, Harmonius succeeded Jean Bricaud, in ecclesia Tau Jean II – when the latter died 21.February 1934. With respect of Eglise Gallicanne, Constant Martin Chevillon were elected Patriarch to succeeded Jean Bricaud on 5. January , 1936 were he received consecration to that central position by Louis Francois Giraud. He was additionally representative for the following esoteric and initiatory orders: L’Ordre Martiniste de Lyon, The Order of Knights Masons of Elus Cohen and the Ancient and Primitive Rite of Memphis-Mizraim of which he was Grand Master after Jean Bricaud (c.1934-1944). Constant Martin Chevillon was born in Annoire (Jura) the 26th October 1880, he was of a philosophical and literary disposition and wrote several books in addition to countless articles on a great variety of topics. It appears Chevillon had from the early 1920`s onwards a penchant for the perspective provided by the awakening in France towards the idea and ideal of the Universal Tradition and treated the subject more consistently than many Theosophists who were greatly enchanted and enthused about the idea but lacked the expertise of actual and consistent comparative scholarship. Another aspect of Harmonius work were his vision of a Spiritual and Christian socialism, ever since the inference of certain philosophies of a libertarian and communalistic kind into France, by for instance Charles Fourier and Antoine-Hoene Wronskij, the latter incidentally one of the tutors of Alphonse Louis Constant aka. Eliphas Levi – the ideals contained in that Vision has been central for the Esoteric initiatory traditions in France and the Benelux countries. Doubtless some of this fervour also influenced the way and manner Harmonius treated his many responsibilities as leader for colleges and orders of a Hermetic and Esoteric nature, so also with Masonry – drawing on inspiration from Count Cagliostro`s organization of the Rite of Egyptian FreeMasonry, which included a Feminine Rite – he decided that the Masonic work he lead should also respect and facilitate a specifically feminine actual Masonic initiatory progress – this became very controversial, just as the later inclusion of a feminine Episcopate which initially in the “non-apostolic” Gnostic Church had presedence with Doinel`s consecration of female Bishops, so-called Sophia`s and Priestesses – would cause controversy in the later incarnations of the Eglise Gnostique.

On March 22, 1944, somewhere outside Lyon,Constant Chevillon faced a firing-squad, formed by a pseudo police-unit. In reality they were collaborating Frenchmen , by order of the ‘ Parti Populaire Francais” and the ‘M.S.R.’ -after having been arrested and interrogated consistently for a long period of time.

The Nazis had formed an iron fist since their occupation of France, to deal with the different movements and orders there which would pose a threat to their new Reich, among those were chiefly Masonic orders, especially those that had developed on French soil, autonomous since the French Revolution, and also those that had developed in England, like Yarker`s charter of the Rite of Memphis-Mizraim. Some leaders of Esoteric colleges did not comprehend the danger they were in, they thought that the occupational forces would empower non-Catholic and anti-Catholic groups such as their own, for example, Les Polaires thought the Third Reich would become the beacon of a coming new race, and became fascinated by the Nationalsocialists own mythology and “technology”.

Rather than bring the man to court for supposed subversive activities, the Nazi occupation goverment and their pawns elected to shoot the man down anonymously. Thus ended a very fertile and yet frustrated period of Underground esoteric work in Europe, from which arose a situation which still haunts continental Initiatory and Gnostic circles.

“Many members and dignitaries of the initiatic brotherhoods and societies were threaten with their lives or simply put into concentration-camps.

Robert Ambelain, a close friend of Chevillon, had a wife and child both deported to the concentration-camps. Jean Mallinger was constantly persecuted by the Gestapo. Fr.Serge Hutin (Sar Pascal), who was the Archon of ‘forreign affairs’ for the ‘Ordre Hermetistse Tetramegiste et Mystique’ (Order of Hermes), was arrested in Cherbourg, France. He was deported to “Camp-Neuengam” were he died in Februari, 1945. Nico Wolff (Sar Ignis) was arrested on March 5, 1943 and deported to ‘Camp Flossenburg’ were he died on April 22, 1943, after prolonged torturing. Raoul Fructus , who was the chairman of the Grand-Council of the Memphis-Misraim Rite (under the F.U.D.O.S.I., part 5-6), died after his deportation in 1945.”