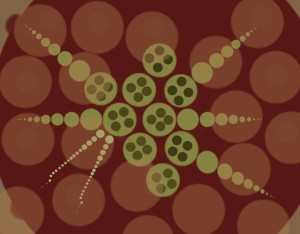 Photoshopping has all possible uses: during the Gulf War some medias used

semi-professional photoshoppers to doctor photo`s so they suited a propagandic purpouse.. even before Adobe`s invention of Photoshop we had a good share of examples, some of them entirely unconscious to the major populace: Have you heard the old saw about how chairman Krutschev took off his shoe and whacked on the table in protest at the UN general council during the Pig`s Bay Crisis? Yeah, everyone saw the photograph.. funny.. tihi.. yes, funny, but the photograph was and is no kind of proof whatsoever.. unless it is possible to verify the time and place and exact visual consistency of the scene depicted in it.. and then it only serves as a support of whatever additional evidence we have to back up an event… the picture was actually doctored, Krutschev made do with a gesture with his clenched fist. Hostile, but not funny/ironic.

By Contrast, I Found this through the Friday feature at www.dagbladet.com – its

a very charming string of examples of creative, playful use of Photoshopology.

CreativePro`s came with the rather expected news that now that Steve Job and his techie stormtroopers at Apple have decided to drop support for us faithfull but poor “old school” Mac users who presently can`t afford to buy another computer (and in fact, for a long while now…wont have to) that – Adobe will Drop OS 9 support in the next major Photoshop Release …

Let me just say this: I survived 3 years with PS3.1 and another 2 with PS5 .. and PS7 has such a smorgasbord of features and improvements that I am not likely to “suffer” much from this standoff. I notice the eMacs go for about the same price as the low-range economy computers.. If I ever get the office space at home, I`d might consider between purchasing a brand new Mac and yesterday`s Intel box.. 🙂

Which is to say, I am not abandoning Adobe Photoshop.. I`ll just stick with the “old new technology” and see whats up.. PS: Did you know it is possible to write a perfectly good letter in MS Word version 6 ….and design a perfectly good flyer in Version 3.1 of Quark Xpress? ..And that clients don`t care if the tool you have is silver and sports bells and whistles?

version of Painter. Number 8 this time. Which is nice, I grow somewhat nostalgic over Version 3 by Fractal Design, it was a great innovation on the theme of “Natural media” painting programs.

If you stop and think you will discover there aren`t really that many around. Photoshop? It is beefed up with a brand new “brush engine” in Version 7, with

Photoshop is and remains (thank ye gods) a versatile and heavy-weight Image processing and manipulation program. Painting in Photoshop can be great fun , but sketching and drawing from the ground up in the envoirment given you in PS is not the most stimulating. I personally wound up with Version 6 of Painter, the first “version” patronized by the big company Corel, it were part of Metacreations (creators of Kai`s Power Tools, KPT Bryce, KPT Poser and so forth) stall of graphic and video production applications, during a time when Corel chomped up WordPerfect….

It`s colourful brush icon has haunted my desktop since I installed it sometime during the year 2001, only a year or so after Painter version 3 featured with my acquired Microtek flatbed scanner (which since has begun hickuping and whining to the extent of being confined indefinitely someplace I cannot remember)…

Anyways… Back to Painting in Painter… in Painter you are helpless and basically doomed if you do not own some kind of input device which is pressure sensitive – you cannot emulate that kind with thumb-pressure on a mouse-button. Then comes the new way “canvas” and layers work and interact.
Computer programs do not adapt to the way we think and create. Unfortunately, it is definitly the other way around, and this is why the user interface and the process-sequence of operations bugs most users so much – and why it is so damn difficult to teach anyone completely green anything about the effective use of computer programs. It`s eerie, but if you stop for a moment and think about one of those annoying questions inexpert and computer-ignorant people ask you from time to time – it is probable you will observe that there are no perfect sense to why you must precisely do what you must do (or else the Program cannot help you, can it?).

Back to Painter… the program in the previous generations grew more and more massive in features and innovations, arcane, esoteric and probably lost-to-the-world interactions of operations and processes remain so and will never come to the surface due to the complexity offered in version 5.5 and onwards…

You can master Photoshop on “prinsciple” – you have a prinscipal overview and controll over the most basic and essential functions for the program – and therefore can choose to solve a particular problem from quite a few directions.. not so with Painter, which is to say, I have no idea how Version 8

Last time I looked on the Press kit that Corel presents on their page, I saw the feature of “Color Mixer” – not to be confused with what you find in PS, which I still haven`t found much use for.. anyways, the Color Mixer is your actual Pallete, do you know what those things are? It`s a surface

of some kind which you can put dabs of different oil colors to produce a specific hue,tint and color for use on a canvas painting or something like that..so Corel decides to let you emulate the process of making the colors as you would do on an actual physical artists pallete.. wont you feel the genius then?

“That color isn`t your typical Peach/Maroon/C14M21Y109K2/Pantone C2091 ..It`s my color..it`s kinda orange-green-purplish with a hint of silver“… wonderful for the computer screen, but… Know what im getting at?

So Corel appeals to the vanity of some of us, I suppose.. like pre-fab java applets which you can make a variation on, adapt and then put your name next to the original programmer… if you dare.. :-i

Digital Brush… what they lack on the actually flat and lifeless dimension which the computer screen is ..

is some kind of touch, some kind of interaction with surfaces..
I want a Pallette Knife which I can Stab with, damn it!

The Photoshop “Brush” trend hasn`t blown over yet,same with the Actions craze.. fortunately, even though you can script

Painter, it hasn`t contaminated the users to the degree the Photoshopper scene has been overkilled.. Adobe has even in many

respects stimulated to this kind of thing.. Painter has.. essentially, from version 5 and onwards, an adaption and creation ability

which outdid PS..necessarely. Surfacing (Paper/Pattern interactions with effects, painting modes and brushes) is also an essential

feature in Painter you wont see in PS, you can do it with a final image, or with some extensive masking techniques, with satisfactory

results, but not on the way to your result.. I recently discovered the many pleasing effects you can attain with Impasto and Water color

in Painter 6 and were well pleased..as well as nothing there is a reason why version 6 shipped with the full set of version 5.5 brushes;

If you want a sketching tool which interacts with the texture of the Papers provided with Painter, you want the Pencils,Chalks and Pastels

that came with that version.. as far as I am concerned at the very least. No idea what happened with Painter 7, or for that matter Painter 8,

they don`t show off anything of this kind in the Interactive preview at the very least. Inks and Liquids is also a nice feature, and cloning, “repainting” photographs or other images with different stroke techniques and brushes, is a nice productive feature you have with Painter from version 5 and onwards. The “Sketch Effect” which Corel now pushes might be an innovation on the theme. A reason to acquire Painter version 8 appears to be if you are likely to import/export between Photoshop and Painter – the confusion

and at times unsatisfacory results you get in Painter 6, if you don`t tweak, collapse and produce multiple TIFF copies of each separate layer in PS/Painter for composition or work in either of the programs..can be a major setback and a cause for endless frustration.

Can`t say buy it, since I haven`t got hooked on it (but I have gotten a craving for pursuing my projects in Painter 6 these days..), since I haven`t bought it..yet.. what a useless preview.. really, it is no kind of preview

and I never claimed it was.. I am only sharing some observations which is useful to consider, if Painting “digitally” is something you imagine yourself to be doing.. I can only say that Photoshop alone does not cut it, best thing to do is make extensive use of your digital camera along with a decent flatbed scanner – Photoshop is wonderful for compositing, processing and manipulating results

from those mediums. Alternatively, create imagery in Illustrator or FreeHand for the same purpouse.

Just realized that this is the first entry in the Computer Art category on my weblog.. cheers for that.