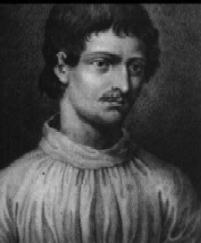 A Philosopher, burnt alive at the Piazza Campo di Fiore, Rome at the bequest of the Pope the 17th February 1600 for Uncontrite and Stubbornly holding an opinion or doctrine deemed contrary to the Views of the Church and the Pope. To wit, for Heresy.

This is the chief reason Giordano Bruno, as a casualty of certain rather disturbing processes the Roman Catholic Church apparently arent still done with – has stuck to the windshield of western civilization. It isn`t a matter of whether he was right or wrong, or even sane.. as with Michael Socin, Peter Valdez,and Jan Hus – he was put to the death by the Church; the Church having suffered so many losses by way of great men and women; great hearts, great minds – unexcelled talent – to the persecutions by the heathen emperors and populace against the people calling themselves “Christians”.

Giordano Bruno was born Filippo Bruno ,in the town of Nola, near Naples, in 1548. The son of Giovanni Bruno, a soldier, and Fraulissa Savolino.

At eleven years of age he enrolled for clerical education at the Monestary of San Domenico. Upon entering the Dominican Order, he took the name Giordano. It became a period of turmoil for young Giordano; he was bright enough, and engaged enough, but perhaps due to his enthusiasm, his hunger for truth and beauty,he did not appear to recognize the strictures and authority of his teachers and monastic superiors. He addressed difficult questions thinking it was natural for all thinking men to give them consideration; of course, he was commended for his interest because he was considered an innocent in the eyes of his elder brethren in the Order.

In the end his opinions, which he boldly defended with arguments available from both the Classics, the Fathers and the Doctors of the Church, where to his contemporaries not only heterodox,

but heretical. For this, even though he was fifteen at the time, he was censored and punished within the strictures of the Order, nevetheless he continued to debate matters thought to be undebateable.

Ars Memoria, the Art of memory – and to hear him elucidate on the Aristotelian “laws” as filtered through the doctor of the Church Thomas Aquinas who was, and remains, a great authority for ecclesiastical, theological,philosophical and “scientific” inquiry and debate.

By 1572 he was ordained a priest as a result of 8 years studies and his prominence in ecclesiastical learning.

When he left the confines of the monastery for good ,sometimes described as a flight, an exile or even a pilgrimage of inquiry into matters unavailable to him within the constraints of the Monastic institution – he began frequenting even more questionable thinkers than himself, among them are the occult

philosopher, a portenous, sanguine master of the “arcane” going by the name Giovanni Battista Della Porta who at his prime had published a work named Natural Magic. Through his relationship with the Count Della Porta young Bruno became simultaneously introduced to the jovial social circles of nobles and their entertainers and learned friends, as well as with the works of Plato, Plotin and the corpus ascribed to

Hermes Trismegistus. Through this fascination and eventual thorough study of these, Giordano Bruno became one of the greater latter influences of the Hermetic revival, otherwise known as the Renaissance, or rebirth.

This new lifestyle and focus for his talents attracted attention, also such attention which make you leave a city in the middle of the night, leaving no forwarding-address or notice to your host in advance. By 1576 he had become so famous to the officers of the Inquisition in Naples that he had to leave the city. Paradoxically his safe-haven were to be Rome. Here he dedicated himself more thoroughly to writing, rather than debating, lecturing and speaking.

A confusion ensues while he stays as the guest of the Convent of Minerva, someone accused him of abusing his mandate as clergy/confessor in instilling heretical views and opinions regarding Ecclesiastical affairs and holy Theological doctrine in young conventuals and probationers, six months after accepting a position with the Convent he leaves without notice.

He reappears in Geneve – Geneve has been taken over by the Calvinists and they don`t appear to tolerate openly Catholic visitors . Those who hear reports of his appearance in Geneve and his being dressed secularly naturally conclude among themselves that he had become an apostate and had allowed himself to be converted into the Reformed Church. A brief month of the discovery

of who he actually where by the authorities in Geneve, he has to leave. After his leaving and the discovery, the officials of the Reformed Church deem fit to sub conditione excommunicate him from the Reformed Church, not wishing to have among its number such an infamous heretic, while not quite certain that he had ever been a convert!

By 1580 that he finally relenquished his Tonsure with the Preaching Friars of the St.Dominic (Dominik Guzman) upon leaving Italy for a more liberal and tolerant France. He stayed in Toulouse, Lyons and finally in Paris. In Lyons he wrote and let publish his Clavis Magna, or “Great Key”, which detailed his understanding of the Lullist Art or Ars Memoria, here he combined his fascination with the Neo-platonic predecessors to the teachings of Blessed Ramon Llull who was

a great influence not only on Bruno, but on Bruno`s time and the preceding Renaissance. By combining the doctrines and speculations

of the Egyptians,Pythagoreans,Persians and ancient Greeks (through the Neo-Platonic “explanation” of these) concerning the dispositions of Names, correspondences of Number,Alphabeth,deities,stars,constellations,planetaries,plants,animals and so

forth in a demonstrative and assertive manner in connection with the more neutral Judeo-Hebraic adaptations of Ramon Llull himself – Bruno became overtly identified with occult philosophy himself. Some few took exception to the rather superstitious “outrage” this caused in certain circles of society – among them Sir Philip Sidney and John Colet in England.

In Paris he lectured at the College of Cambrai, but he met great opposition when he sought a teaching position at the University, as a consequence he engaged himself in a more public form of oration. With his apparently endless supply of controversial ideas this entailed catastrophe – he outraged and exhausted several patrons, he wrote the satire named “The Torchbearer”, which was received as satire, so naturally he had to leave Paris, preferably leave France. Now it seemed every “Latin” had a query with the philosopher from Nola, everyone could seemingly report they had brushed shoulders with him and came from the encounter with unease and hurt.

There was actually a lot of public complaining going on, Having won some favour, apparently at the court of Queen Elizabeth, perhaps through Sir Philip Sidney – he was able to cross over to England in 1583. He lived for two years as a guest at the residence of the French Ambassador in London. Like in Paris he encountered a certain unwillingless towards letting him lecture at the established academical centres.

During his stay he let publish a bitter tract called “The Expulsion of the Triumphant Beast”, while much of more common fare in the underground of dissenting, mainly Protestant circles of intellectuals, the very rumour about it scandalized his former circles in Italy, France and Germany. He vented his frustration with the Ivy league at Oxford in his Ash Wednesday Supper, wherein he also, apparently ineptly with regards to science – argued for the reconsideration of Copernicus theory of a Heliocentric

cosmos. His stay in London were significant for the further course of his life – he had been more explicit about what he thought and felt, what he considered his unique grasp on Truth and the laws that regulate being, and had let a certain bitterness and counter-scorn be known in writing. Several of his works had been put on Index by the Vatican. He was now infamous and almost every Catholic he had known thought he had not only left his Order but the Church as well. As a result of all the moaning and bruised ego`s in his trail, all well aware at how dangerous Bruno was perceived of being in certain Roman

Catholic quarters – he was finally lured into a ruse and probably thought of as good as dead already by an unknown enemy posing as a prospective patron. He invites Bruno to Venice, has him dine and drink well and good at his table, traps him in his quarters and let sound the alarm to the Inquisition that he caught the infamous Nolan.

A Martyr? In origin Bruno was an Italian, by birth a Roman Catholic, by vocation even within the Ecclesiastical Orders. At which time he was apprehended and imprisoned for 9 years to the end that he was finally burned for heresy – the Church itself disputed his affiliation with the Church; which is to say, if the Church denied he was a Catholic matters are quite simply that he is a casuality of a brutal, extended religious war which doesnt seem to end even today – between Roman Catholicism and the Protestants.

But he was burned for heresy and he continued to argue in the manner he was famous for – which disturbed by the ecclesiastical authorities, although the subject matter of his inquiry and dispute were never ecclesiastical.

It is my opinion John Paul II, the present Pope – also apologized on behalf of his office – the work of his predecessor in having Giordano Bruno and so many others burned for … having a contrary opinion and speaking it.

Was he a champion for free thought? He expressed his opinion without regards to others and their standards and sensibilities – he did contribute to set an example of sorts, I dare say I cannot say all for the good – rather he also made, at his very last, everyone aware of the price asked should they themselves do as he did. I view the period in time as a catatonic with a bleeding forehead from banging too hard and too repetively against its own walls. A horrible miscarriage of the middle ages. Bruno, with John Dee, with

Giovanni Battista Della Porta, with Edmund Spenser and Shakespeare and Bacon, where very much part of that time as well, they suffered as much as those walking around freely without a thought in the world except for their next meal; sometimes a difficult and complex practical problem, albeit principally simple in theory. These conditions birthed some of the most deplorable tendencies in modern thought and religion; what the west could have done without – with some honourable few, very few, exceptions.

of Giordano Bruno, go there and make up your own opinion.